You are cordially invited to attend the HKIAC Lecture: Changing Expectations for Counsel and Arbitrators as part of the Seoul ADR Festival 2022, delivered by David W. Rivkin, Co-Chair of Hong Kong International Arbitration Centre and Partner of Debevoise & Plimpton. 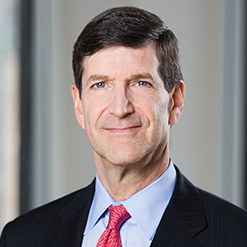 David W. Rivkin is a litigation partner in Debevoise's New York and London offices, with broad experience in the areas of international litigation and arbitration. He served as Co-Chair of the firm's International Dispute Resolution Group for more than 20 years, and he is a Past President of the International Bar Association (IBA).

Mr. Rivkin is consistently ranked as one of the top international dispute resolution practitioners in the world. Chambers Global (2022) identified Mr. Rivkin as one of the top 10 international arbitration practitioners worldwide, describing him as "an extraordinarily bright, thoughtful and clear advocate." Previous editions of the guide have recognized his demonstrated "aptitude for complex, high-stakes disputes" in international arbitration, and highlighted his achievement in securing one of the largest ICSID awards ever. Sources say that he is "a leading light and one of the most respected figures." Chambers Latin America (2023) ranks Mr. Rivkin as a leading international arbitration lawyer and has described him as "an accomplished arbitrator" and a "very thorough and focused lawyer with excellent advocacy skills." Other Chambers publications have noted that he is "incredibly sage and insightful," "outstanding," "a true giant in the field, whose depth of knowledge is incredible," and that "his advocacy skills are without parallel."

Mr. Rivkin frequently advises companies on Environmental, Social, and Governance (ESG) matters and compliance. He is one of the principal authors of the firm's ESG Resource Center and of the UN-commissioned report "UN Guiding Principles on Business and Human Rights at 10."

In 2014, when The American Lawyer named Debevoise the Litigation Department of the Year, one client's General Counsel noted, "The thing that impresses me about lawyers is when they come up with better answers to problems than I do. Every once in a while, you encounter a lawyer who has really created the better answers. David W. Rivkin is that lawyer."

In 2012, The American Lawyer's Am Law Litigation Daily named Mr. Rivkin one of two "Global Lawyers of the Year." In 2011, the National Law Journal named him one of the country's "Most Influential Attorneys." He has also been ranked as the leading American in international arbitration in Who's Who Legal (2016) and in Euromoney's Expert Guide to the Leading Lawyers: Best of the Best (2017).